If you’re a regular visitor to this site you probably know that our group of 20 or so modelers, and non-modelers, has been tearing down and rebuilding sections of our public display layout from the very beginning some 20 years ago.  The goal is to (a) keep our regular members busy honing the skills they may not have room and resources for at home and (b) present something new and interesting for our thousands of visitors who contribute to our bank account, meagre as it is.

Usually these reconstructions involve a portion of that layout encompassing about 3 to 6 feet in length or just enough space to rearrange the selected track and scenery during a 6 week mid-winter slowdown in tourist traffic.  This year, crazy to the end, we took on a great deal more. 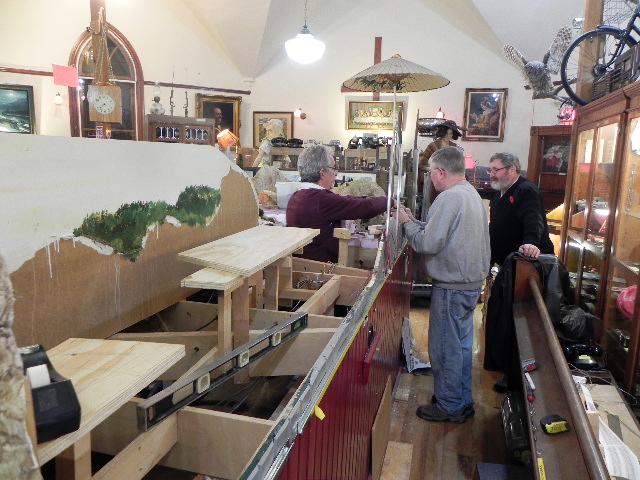 I never thought it would get this far again.  All of the old plaster casts were removed (What a mess that was) and the old forest scenery was set aside for reconstruction and reuse where possible.  Paul Yeo took over the project then and showed us all the step-by-step method of using pink foam insulation as a foundation for scenery.  What a difference that made!

Thank goodness we work in a museum because there were always plenty of heavy iron items handy to use as the weights holding sheets in place while glue dried.  You can already see the very basic form the canyon mountainside will take when completed. 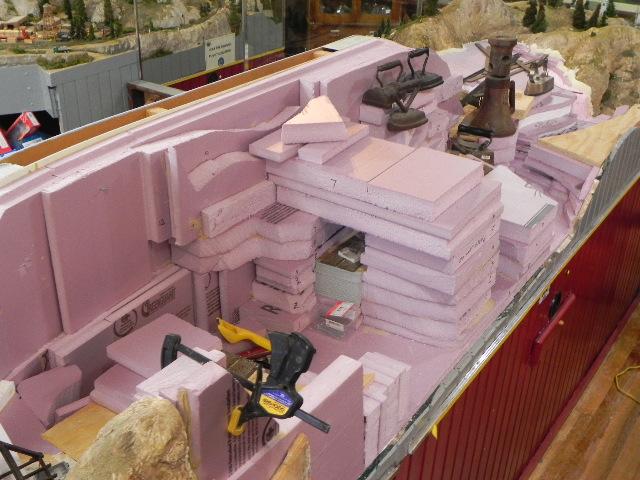 Limited public running continued while the interior main line was interrupted at this location and members worked at home building bridges and trackside structures to be added later.  A lot of research also went into what passed for a ‘modern’ logging operation in south central BC during the 1970’s.  It was all new to most of us but one member, Allan Willcocks, had made it his life’s work.   He was a great data bank for the rest of us.

Soon the foam was carved away and plaster was applied in a series of thin washes, light and easy to work with.  The double through truss bridge was installed and track work began from McCulloch towards Chute Lake.  No.  Of course there were no double track bridges in Myra Canyon but model railroading is such that you can forgo reality for operation.  A situation not to be taken lightly.

Our operation nights were planned around eastbound and westbound trains, both freight and a single passenger consist, and so a long passing siding was required between Penticton and Midway is anything was going to move at all.  The real KVR never had that issue.  Thy never ran 3 or 4 trains a day in two directions over the same section of track.

You can see the carved ‘rock’ starting to take shape above the bridge.

And as it takes shape  some rules apply. 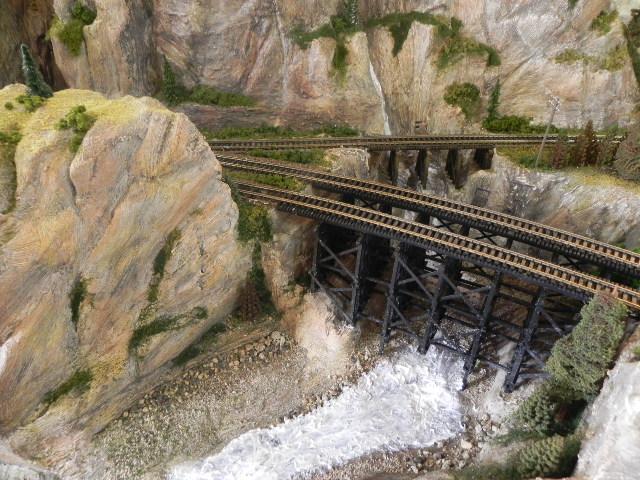 This photo shows only the first application of the Gloss Medium and only after the first 5 minutes.  I’m very curious what it will look like when it becomes clear and the river bottom shows through.  I plan another application or two and the addition of the normal deadfall material you always see along the shores of any stream.  Particularly mountain streams.   News at eleven.

The siding at McCulloch is pretty much finished now.  Adding more would only distract from the scene.  The spur is in and I added a simple wood and fill ramp so the users would gain easy access to the floor of a boxcar or flat.

Incandescent lamps in the buildings were replaced with LEDs and small two dollar voltage regulators from China were set and put under the layout to keep that voltage at 3.1 VDC.  Highly recommended indeed.  Keeping it “busy” there are 5 people in the scene meaning there are more people in the model than there were at the actual station. 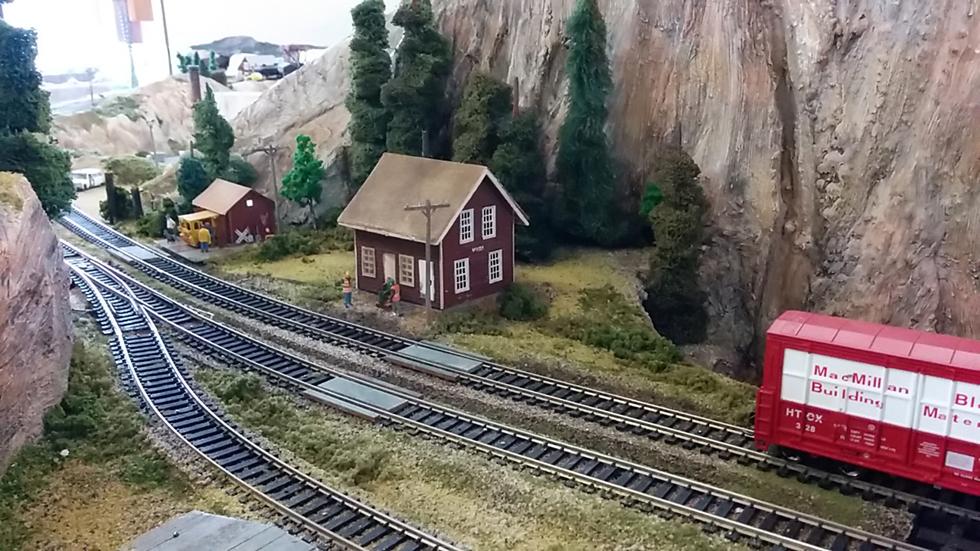 Hidden in the bushes beyond the turnout are the sensors for the Yardmaster stopping and starting feature we use on this layout.  If a train has stopped at the station, interrupting the sensors, an AND GATE cct contributes to the data needed to arm the public push button.  Three trains at three stations and it’s ready to go.

Press the button, DCC is applied to the track at the appropriate stations and the trains all leave for their next stop.  DCC remains applied to the station track until a following train arrives and DCC is turned off.  The track is armed for the next time.

Our Myra Logging scene is just about finished at the far end of the new display.  This is the west end of the canyon and the former home of a large gravel pit that never really existed but it took up an awkward space and it had a lot of lights.

Over the next few days more trees will be added in the foreground just as there would be in real life, log cars will be realistic flat cars with stakes and a small grappler to unload logging trucks and load train cars.   We may have to wait until summer to harvest realistic logs that scale out from 6 inches to 30 inches wide.  More typical of the southern Okanagan. 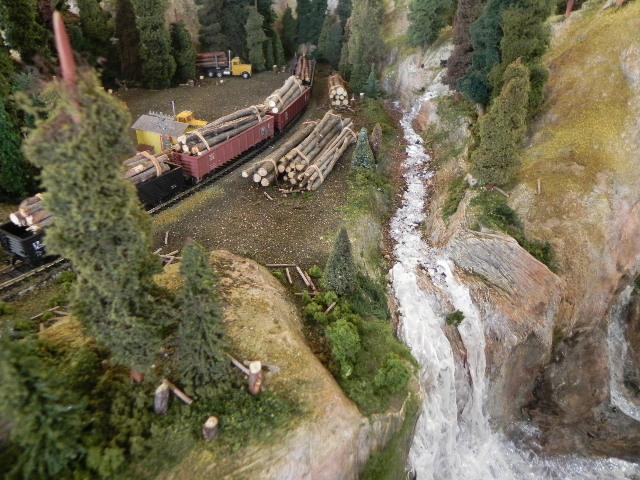 The small creek and the waterfall have not ‘aged’ yet so it still looks very white.  That will change.  We also acquired a small 44-toner type diesel engine of the appropriate vintage.  It runs well and DCC will be installed so the log cutting group will be very well equipped to provide us with business for years to come.

Our address and phone number are elsewhere in these pages and you’re all invited to pay us a visit during your Okanagan holiday this summer.   World famous wine in the sun on the beach and trains.  Pretty fine.