Actually no, and none in all of Canada either.  But today you will find an HO scale approximation of what “might have been” in Spanish Fork UT, right here in West Kelowna.  Dave Spritke, a newer member of our Central Okanagan Railroad Club has moved his 8’ two section HO Free-mo module from Utah, USA to it’s final home in Canada.   Its transit included several homes via an 8000 mile journey, including Eastern Newfoundland/Labrador.

Dave is in the process of integrating his Spanish Fork module into an around the room depiction of places that are, or might have been, around the Spanish Fork and Provo area of UT.  Given a small room, these are necessarily being represented by place names, and a few modeled actual structures, scenes and bridges from places he visited during a three year residence in Spanish Fork.  Loosely represented is the steam-diesel transition period spanning several years.

Being a D&RGW modeler and fan before arriving in UT, he soon took an affinity to the Tintic Branch of the D&RGW in particular, and also discovered and fell in love with the UTAH RY as well.   Soon there was a flurry of activity in chasing trains,  research of the Rio Grande in UT, and a stint working on the Heber Valley RR which operates on the former D&RGW Provo Canyon branch, plus tracing a bit of the abandoned portions of railroads in UT.  New friends provided help and needed encouragement in building a module which was then used in several Utah and Colorado meets, in addition to participating in operating on other’s model railroads.   Dave reports that Utah, sometimes termed the cross roads of the west, is a relatively little known treasure of several RR’s and history. 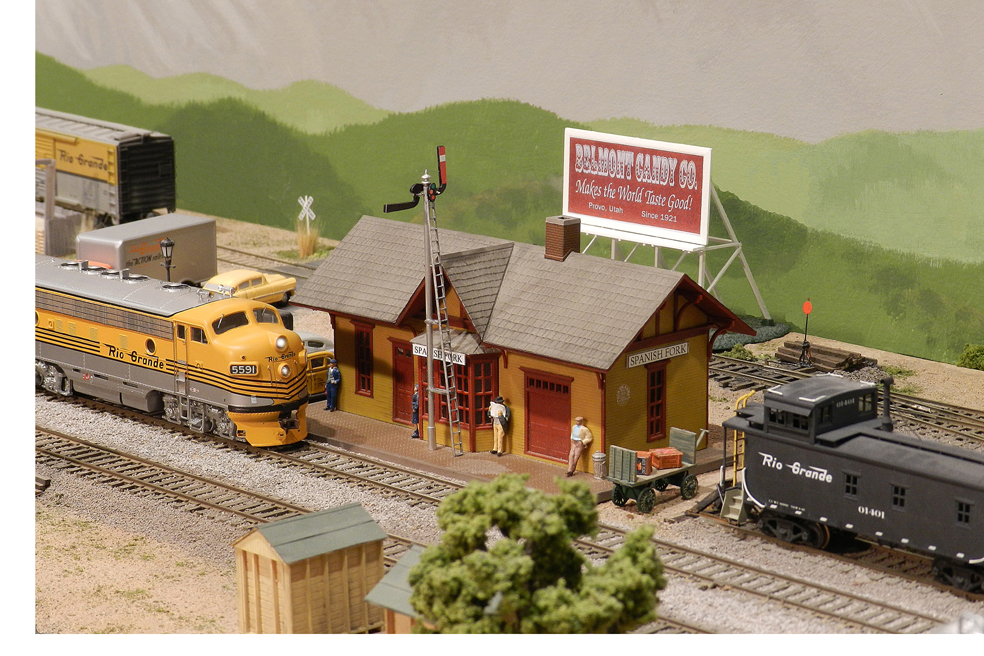 It’s train time in Spanish Fork as the 5591, with bell ringing, glides to a stop at the station. It’s a rare occurrence that a brand new F-7 passenger unit of the Grande ever visits the town which is on a branch line that is diminishing in importance, but the Grande is here showing off it’s recent purchase to the residents of towns on the line, hoping to reinvigorate passenger travel and business in general.
The models shown include a repainted and slightly enhanced version of a Walthers station with an Osborne models train order signal, an Athearn F-7, and a custom painted Lambert brass caboose. The little shed is a hard to find Wolf Designs kit/model of a prototype D&RGW work shed. 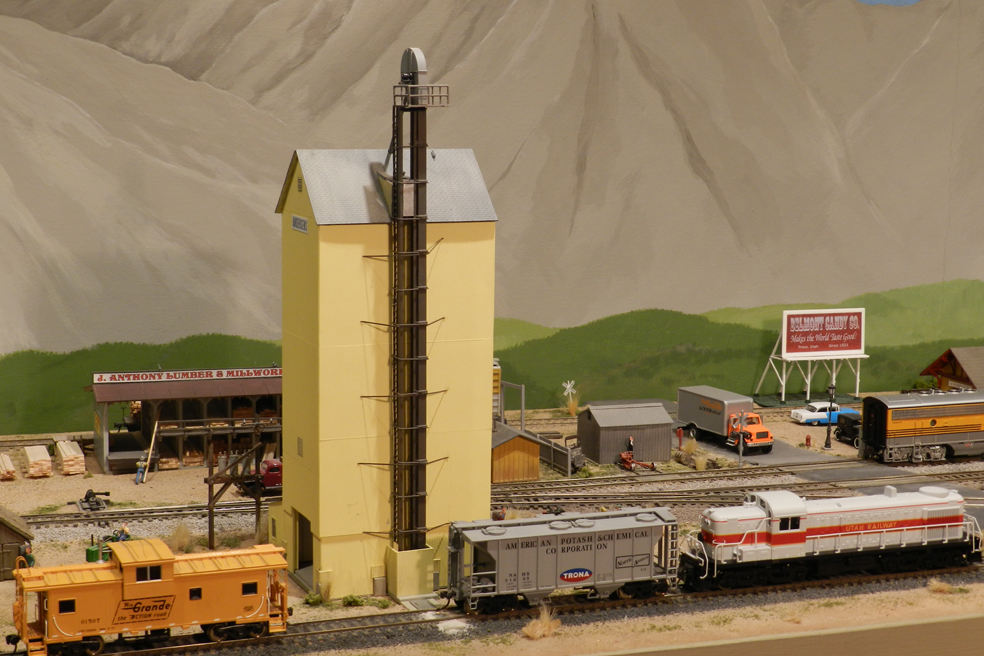 A Utah Railway RSD-4/5 in fresh paint, but lacking it’s cab side number decal, is returning horsepower hours by switching Andersen’s elevator, pulling an empty car just relieved of it’s load of Potash. In the background the 5591 idles as the station just barely clear of the road crossing with it’s signals turned off to permit a Rio Grande box truck and other traffic to cross.
Models include the Atlas Alco RSD 4/5, Athearn wide vision caboose, and the Trona potash car, an Atlas model. Anderson’s elevator is the Spanish Fork signature structure of the module and was modeled in Evergreen Styrene via photographs and a few dimensions from ground measurements. It has several sizes and types of corrugated siding closely matching the prototypes five different types and sizes, none of which are metal. Also interesting is that instead of loading RR cars, it received granulated potash by rail car which was elevated and stored in upper level bins to be later loaded directly into trucks for hauling to the regions agricultural fields. The structure, abandoned in place many years ago, was still in Spanish Fork in 2017. Sometime, ask Dave about this structure and how it came to prominence on his module. 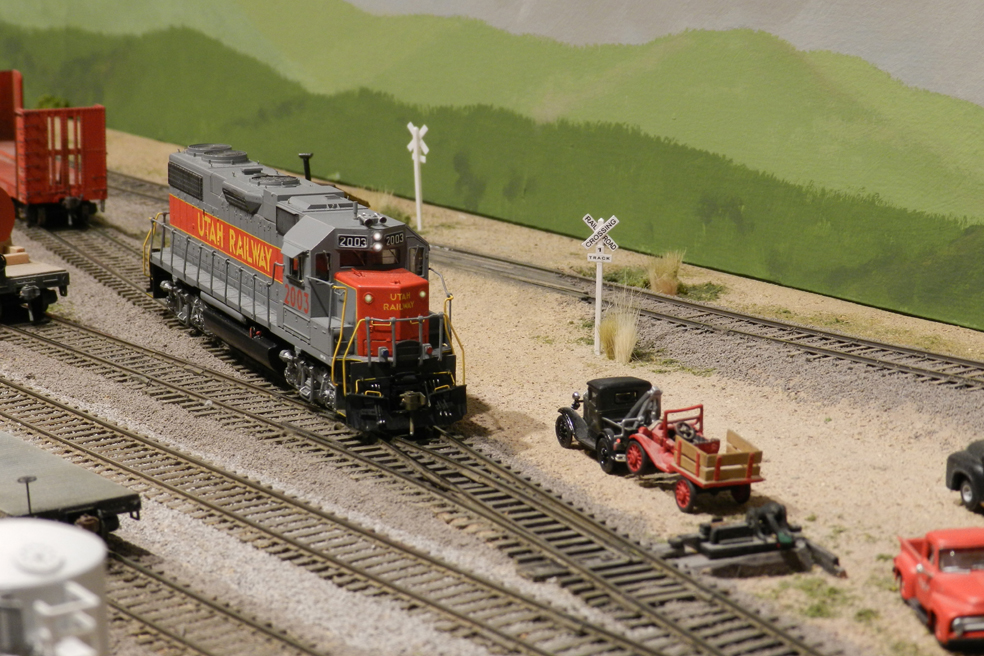 Yet another Utah Ry locomotive is working off horsepower hours on the Tintic Branch in Spanish Fork. It has just set off a bulkhead flat and appears to be ready to help with the tow of an old truck. The model 2003 is an Athearn Blue box kit, with a custom painted and decaled shell, but otherwise an original blue box kit. Dave repowered, upgraded and detailed the loco and detailed it to match the prototype.
The prototype Utah Ry 2003 was originally an SP GP 35R and rebuilt to a GP38-2, losing 500 hp in the process, but retained it’s original GP-35 body. It reportedly continues to serve the area, but wearing the colors of the RR’s new owner, Genesee and Wyoming Industries. 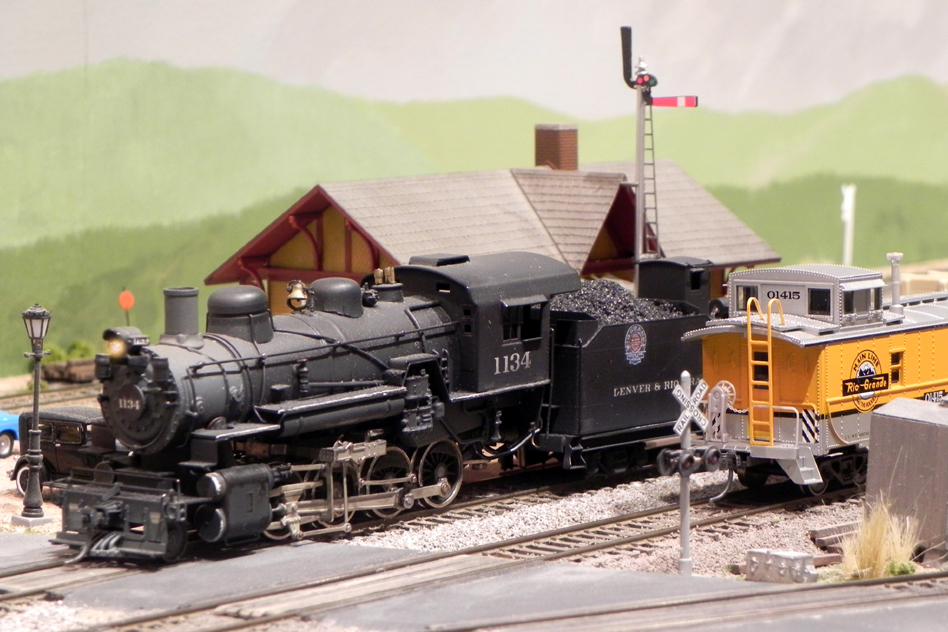 It’s rare to see steam locos these days, but D&RGW 1134 still serves the Tintic Branch hauling large quantities of rich mineral ore, grain, and ballast rock for company use. The C-48 class 2-8-0 makes it’s weekly appearance a brief but noisy passing through Spanish Fork on it’s way to the nearby mainline, and then on to Provo where it’s based. In all, it serves three separate branch lines from it’s base as well as making local runs to Geneva Steel and Ironton.
The model is a Nickel Plate Products brass model produced many years ago. It now sports a can motor with flywheel and decoder. On the adjacent track is a caboose from the now predominate diesel era, a ready to run Athearn model. 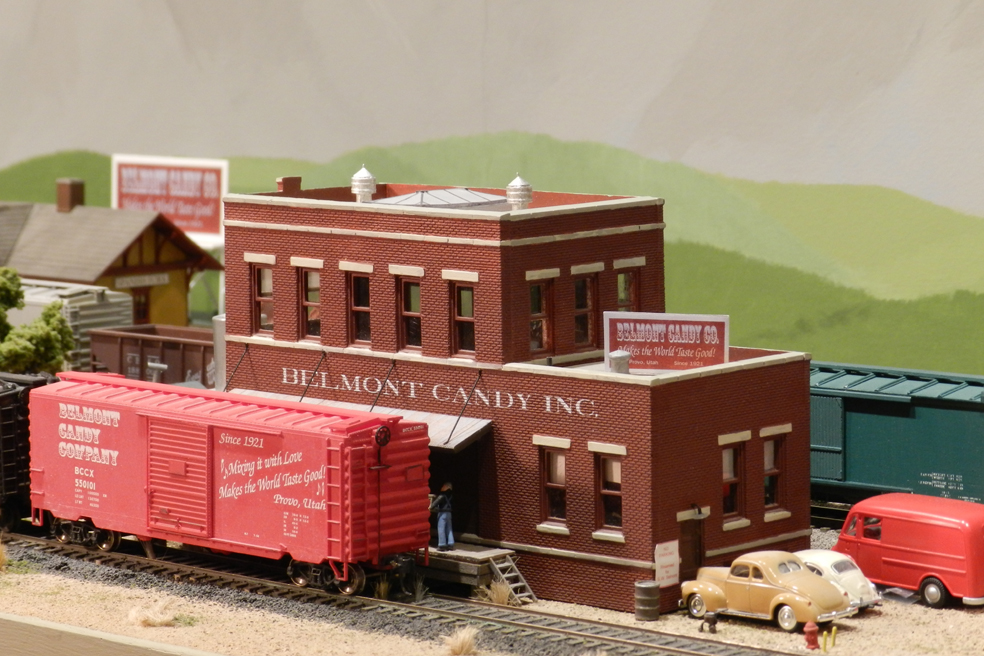 The Belmont Candy Company crew is hard at work on their loading dock, putting the last few boxes of sweets into one of two BCCX company owned cars. The structure is a Design Preservation Models, Cuttings Scissors kit, a gift to Dave from a dear friend who also designed and printed the decals for the kit, numerous signs on the module including the colorful Belmont Candy Company signs and the decals on the Accurail box car. Dave added the loading dock and canopy, plus various other items and details to the otherwise simple kit.
No Belmont Candy Company in the real Spanish Fork, but the name has a special meaning and Dave has a story, too long to relate here, all about it’s origin, how it fell onto his module one day, and the people involved. As such it occupies a special place on the module and is a busy industry to serve.