Much anguish resulted in the decision to strip Midway of it’s eclectic collection of ‘stuff’ and rebuild it into something vaguely representing the little town at Mile 0.

There really wasn’t a great deal to see there. Not a great deal going on. Just a lovely CPR station on a broad, flat, dry spot in the mountains with it’s accompanying fuel tank, lumber mill, stock yard and a M of W track. That was what attracted me the most and that was what scared off many others.  Would we lean towards a model railway or would we lean towards a museum piece?

Eventually we came to some accommodation. All the old junky quasi-European buildings would go.  All the North American items would stay. Well, at least some. The new Midway didn’t need a dozen logging trucks and an equal supply of lumber. 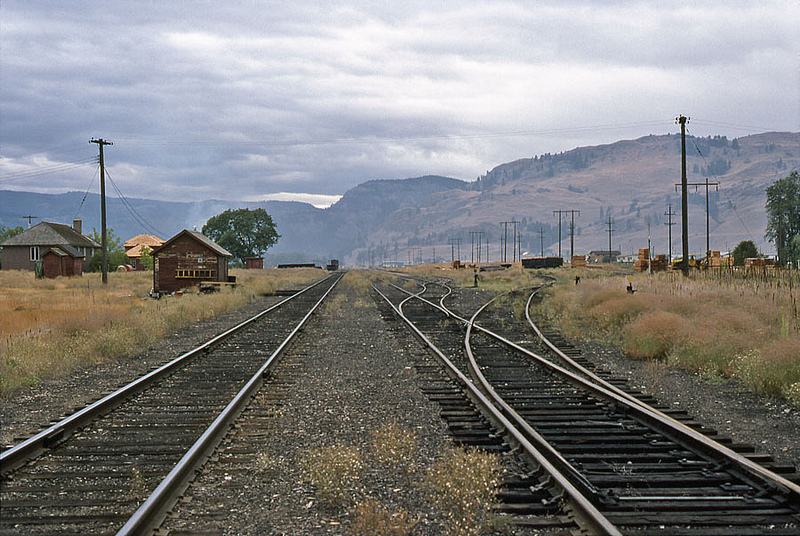 As can be seen, Midway didn’t need much but it was a great place to model and, if done right, would offer a great scene for the visitors.  Other pictures showed us where the loading pens were and where the fuel tank was.  You can see the lumber laid out on the ground here and there.  The station is getting a new roof.

First things first, we needed to extend the original Midway display in order to fit in a usable siding.  One that would leave the confines of the station and push into the yard.  Much of the activity at Midway was done in sidings.  Our work would have to be done using spur tracks – and only two at that. 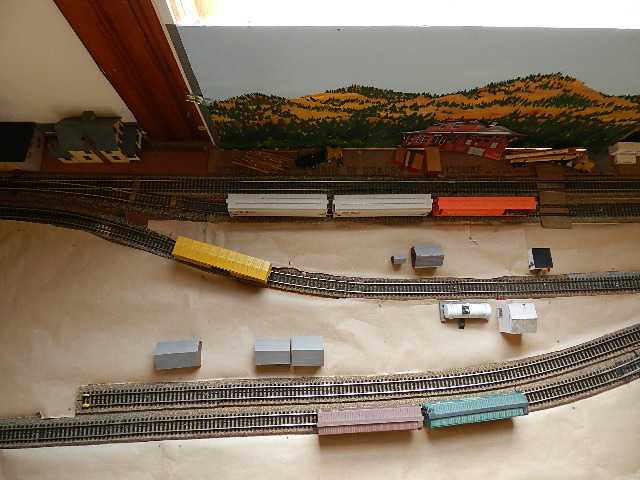 Seen above, the third track around the museum was pushed down into the new space left behind by tossing the old buildings.  The small railway buildings were photographed, measured, built and set in their appropriate location.  The fuel facility was installed right across from the station.  Two dead end tracks would have to suffice for all of the rest of the day to day Midway activity.

The station BTW would be scratch built of course but only be the front 1/2 simply because there was very limited room between the museum window and track #1.  It worked for us in Nelson. 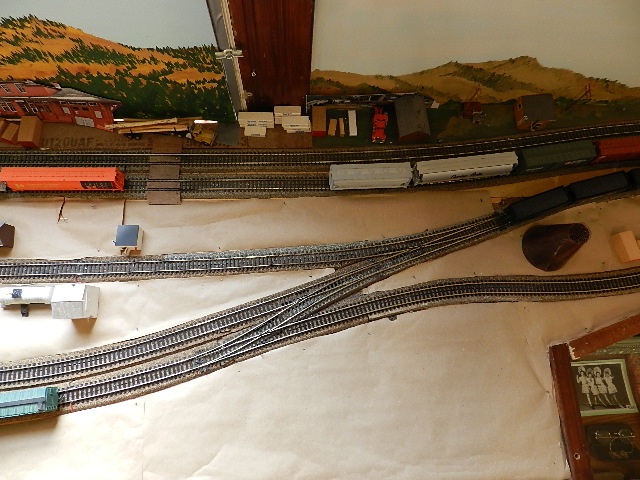 Farther ‘west’ we reworked the original turnouts into the new track #3.  Two direct track to the spurs seen previously and one heads to the right (East) into the new sawmill area built onto the original shelf display.  This was done with no thought to fitting a known sawmill into the space but rather we would simply build a mill to what ever size the new shelf extension offered. 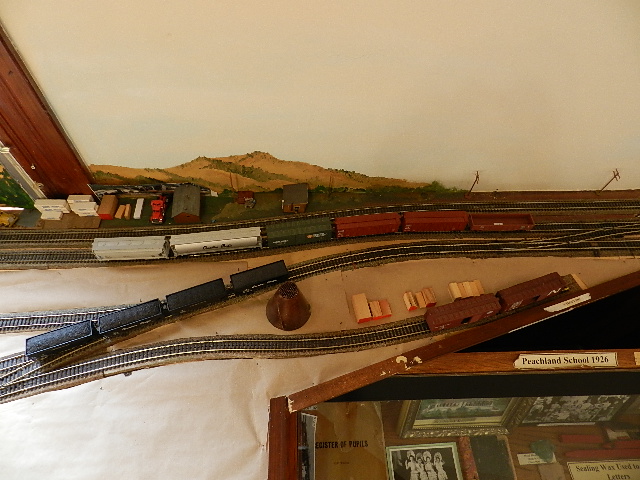 So, this is what we have.  The sawdust burner has to be filled with smoke fluid so it needs to be ‘up front’ where it can be reached and the car loading needs to be near there as well.  That leaves us with a few inches of space at 7 o’clock from the burner, the little unused space on the right where cars are loaded and the back wall of the museum.

We have some nice photos of sawmills, large and small, so we’ll use the best, get them copied at 2 or 3 times the photo size and place them against the wall.  I’ll add a few bits of pipe here and there and a large ‘over the track’ walkway with a mass of pipes that connect the lower wedge of space to the mill itself.  That should create a compact, busy industrial area with lots of lights, noise and smoke while retaining the hot dusty prairie atmosphere of the station area.

We’lll keep you up to date.