December 15, 2014
by Dave Winter
Comments Off on Penticton on hold – Greenwood at work

With the sudden disappearance of creativity in and around Penticton the crew have moved over to the sleepy village of Greenwood.  It’s a quiet ‘near ghost town’ high along the Highway 3 route across the south.  Promoted as BC’s smallest … Continue reading →

….It seems the winter rebuild is already under way.  Much more extensive that originally planned of course. What was planned was a “dressing up” of the large Nelson yard.  It’s a dark wall with a very long, 6 track yard. … Continue reading →

Very much thanks has to be extended to members and guests at this years swap meet and soiree held on the 4th of October.  Everyone who attended seemed to enjoy themselves whether selling, buying or simply looking.  This garage sale … Continue reading →

Good news and bad news. Bad!  The annual Swap Meet as advertised on these pages has been cancelled in favour of a much less structured event. Good! Our group will still be having a free, informal swap meet and train … Continue reading →

September 18, 2014
by Dave Winter
Comments Off on Summer is over. Pretty much anyway…..

….and it’s been all to short for me.  I know I should’a spent a lot more early mornings out on the lake but there always seemed to be tomorrow.  Still, as a group, we accomplished a few things down on … Continue reading →

Last week Jeremy Spurway, one of our favourite supporters, dropped in and took a short video of the whole layout as we worked away on the new town of Nelson.  The RDC’s stop from time to time, as they should … Continue reading →

June 23, 2014
by Dave Winter
Comments Off on And Nelson takes shape

What was once the old gravel pit crusher/sorter/loader/office building has been incorporated into the new, much larger and more interesting facility.  You can probably pick out what remains of that European gravel thingy but we don’t throw away anything around here.

Other parts of this industry are a built up dairy building and three corrugated metal and cardboard kits all of which we received in donations.  Add to the mix a few pieces that John Green had in his ‘nice to have’ box and I painted it up to look like one company has owned and operated it over time.

John has added industrial lighting along the loading spur and once the sun stops shining through all the windows here it will look really bright and busy. 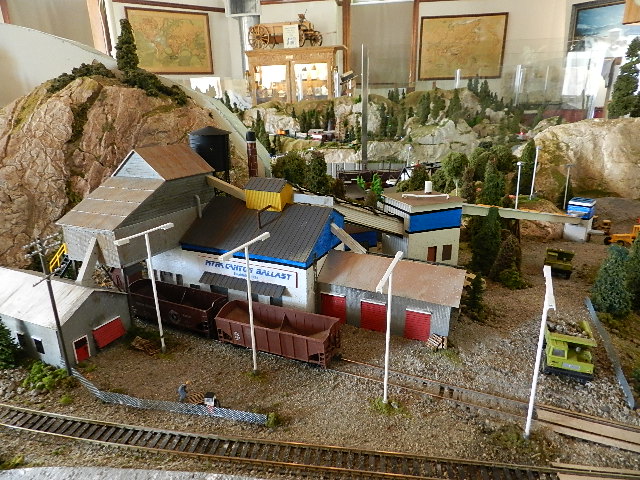 The conveyor reaches down into “the pit” and has done away with the need to have heavy trucks bring gravel up the hillside for only about 100 yards so they found another outlet for their efforts.  The road from the pit now goes “off scene” towards some other destination.  More interesting I think and we maintain all the trucks and diggers.

All of the earth movers are well lit with flashers and the whole pit is bathed in light for working through the evenings in summer and through long dark winter days.

Over the next few weeks I will finish it off.  There are still a few very small details to add, people and industrial junk for example, and maybe some sound but that’s about it. 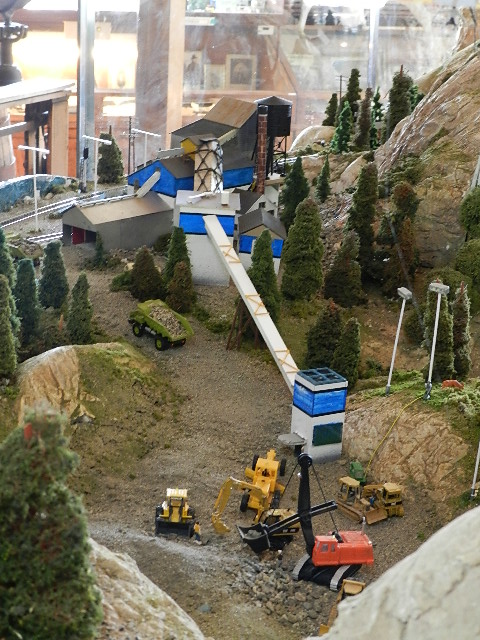 We mustn’t leave without thanking John Green, Mr. Track & Turnout, who keeps things moving through the scenery.  After all, that’s why people visit the museum.

Today he was instally the turnout motor for the Myra Canyon Ballast spur.  It was a hand throw in the past because the spur was actually unused – and behind glass.  Now it’s actually used by our members so remote buttons have to be in place.

Seems he found a new modern turnout control switch during a recent visit to Calgary so we are the beneficiaries of his shopping spree.

Thanks John.  Next up?  Nelson. 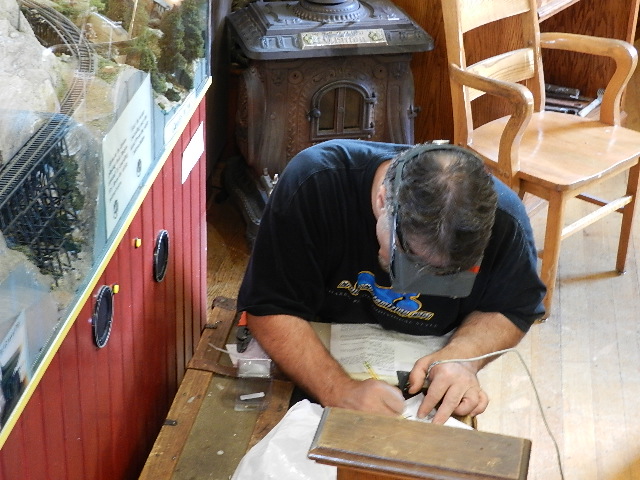 John hard at work while I watch.

For sometime now we have had this huge gravel pit just outside Penticton and above Naramata near Little Tunnel. We inadvertently created this impossible to reach location when we built the broad loop of track that rises to the major Myra Canyon section of the … Continue reading →

April 21, 2014
by Dave Winter
Comments Off on Finishing the mill at Tulameen

21 April 2014 Hi everyone Everything is in and working at Brookmere.  Don’t wait for Wednesday night.  Drop in. Arnold was generous enough with his time and material to add lights to the water tank and the coaling tower AND gift us … Continue reading →